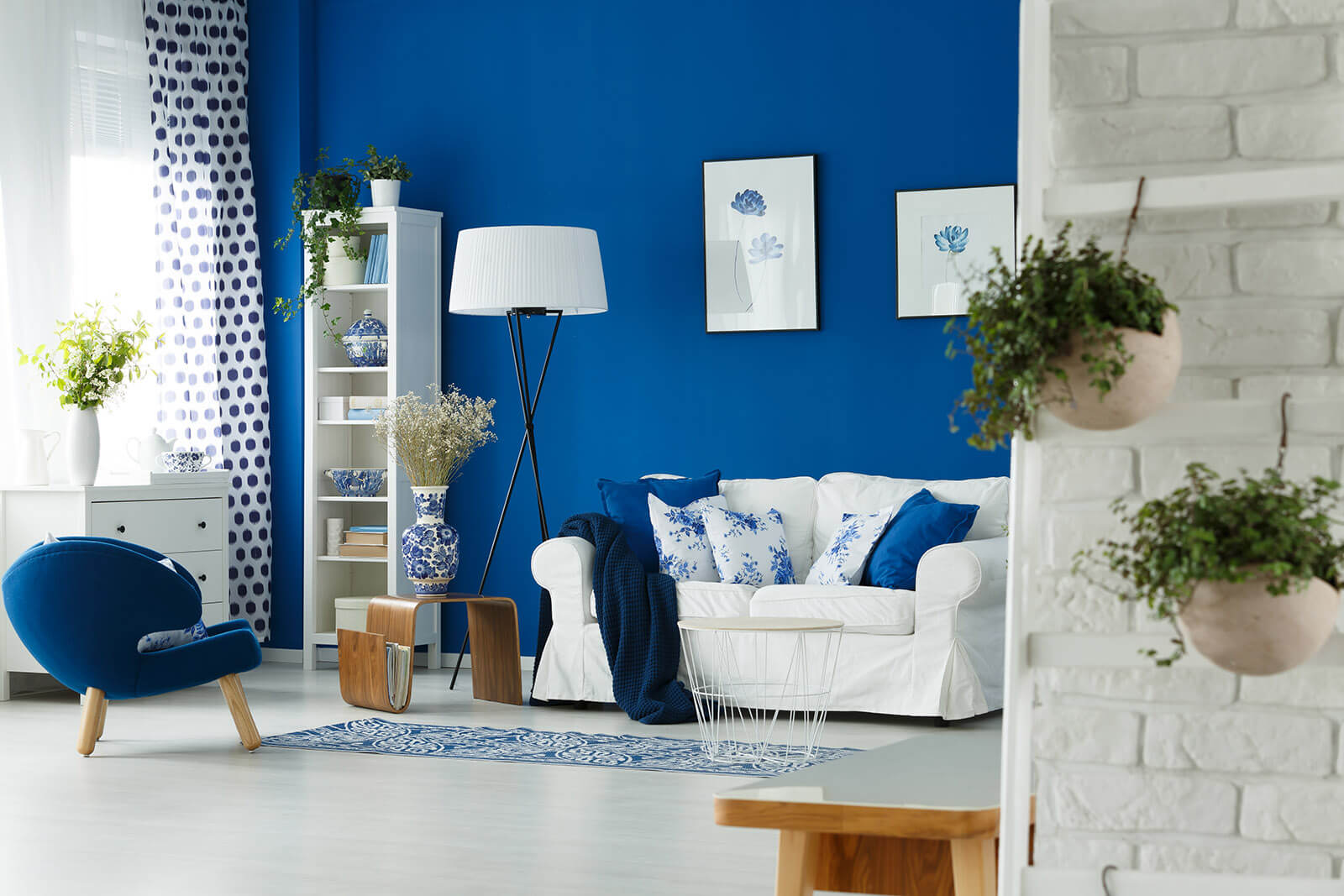 The Blue Bay look, with its balance of blue and white, looks classic yet very fresh because of the color combination.
SalesFever Sessel mit Armlehnen und Webstoff... 349,00 EUR

When you decide to paint an entire wall in your living room, you have to be aware of the effect and your overall color scheme in the room. In this case, you have chosen a rich dark blue, which in combination with the white elements in the room creates a nice contrasting room climate. One can speculate whether the blue and white porcelain on the shelf and coffee table were inspirations for this room. The vase with the floral pattern goes very well with the country style furniture that gives a face to the room here.

The typical thing for country style furniture is certain curlicues on the shelves or the recognizable former board structure on the bookshelf. In white, the country style always has a noble touch and looks classic, which here, however, with the help of the blue color was loosened up and the whole was breathed new freshness. The sofa against the wall with its distinctive armrests is also considered classic because of its shape. With the help of the pillows, which perfectly match the vase, even more coziness moves in.

Not only country style

In order not to make the country style look too stuffy, the classic furniture is combined with modern objects with interesting shapes. For example, the armchair fits in very well because of its color, but with its free form it looks a little like a foreign intruder. But this mixture makes the room just so exciting. The same can be applied to the coffee table. It is definitely not country style, but totally modern. Its appearance is due to its function of also being a magazine rack at the same time. The second coffee table in the picture is easy to overlook. It is made of a filigree metal grid in white and thus contrasts with the heavy sofa.

So that not everything is white blue and looks too sterile, green plants have moved in, which give the already fresh-looking room even more of it. They also give more naturalness to the honestly strict country style. The dark wood, which is used in two places in the room, becomes an eye-catcher in the otherwise monotonous living room. It has a nice effect in combination with the white and you feel it gives the room a rougher character. The latter is also reinforced by the white wall feature in the right side of the photo.

Many accessories are typical in the country style, such as the porcelain, which we have already talked about at the beginning. In addition, the curtains with blue dots also picks up a bit of this playful style. With its combination of white and blue, it is the ideal choice for this living room. The pictures on the wall also look very classic and match the china. The large amount of white in the pictures, as well as the floor and the white sofa, brightens up the room significantly. The floor lamp next to the couch is anything but classic country style and is more honestly of the modern era. The black metal rods as the base of the lamp could match the thin black picture frames, but still break the image of the room. However, due to the dark color in front of the dark wall, they honestly take a back seat and for that the lampshade seems to rise much more in the room. A nice mix of country style and modern elements.